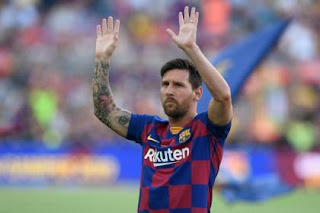 Neymar’s transfer from Barcelona to Paris Saint Germain was one of the heavily talked about issues in football. But the 27 years old Brazilian attracted more controversies when he later expressed his desire to return to Barcelona. Lionel Messi was a friend and teammate whom Neymar confided about his interest in returning to Camp Nou, however, if Messi is optimistic about the transfer in the past, the Barcelona superstar is now singing a different tune, and he shared several details about it.
Lionel Messi recently revealed in an interview that a possible Neymar-Barcelona reunion might no longer happen for several reasons. The 32 years old Barca captain noted that it is tough to bring the Brazilian back to Camp Nou because of the way he left Barcelona. He added that there are several members of the club and other people within the club who do not want him to return.

317 people are talking about this


This is aside from the financial hurdles that may arise considering the scale of his departure from Paris Saint Germain. The 27 years old Brazilian footballer is still contracted with Parc des Princes until in the summer of 2022. Also, it appears that Paris Saint Germain is unwilling to let him go for a deal lesser than what they invested for him.
Barcelona superstar Lionel Messi shares some shocking revelations about Barcelona, some members of the team, and Neymar.
Earlier this month, Lionel Messi also spoke to ESPN FC and shared that he thought Neymar would have gone to Real Madrid last summer. Messi also believes that at some point, Neymar regretted his decision leaving Barcelona. In September, the Argentine football superstar revealed to Sport that Neymar was desperate to return to Camp Nou following his two years stint in Paris Saint Germain.
It is understandable why some members of Barcelona may have some resentment towards Neymar because of the manner he left the team. Additionally, lawsuits between Neymar and Barcelona are still ongoing. The Brazilian is suing Barca for €26 million he thinks the club owed him as part of his bonus.


The Blaugrana, on the other hand, is countersuing the 27 years old footballer for €75 million. As time wears on, the window of possibility for Neymar to return to Barcelona is wearing thin. Expect reports about Neymar’s transfer to flood online with the transfer window drawing near.
Sport Updates