‘If Sowore was Igbo, he would have been out by now’ – Reno Omokri 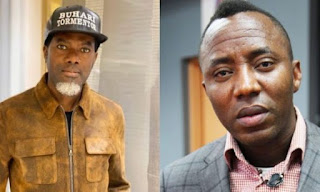 Reno Omokri is of the opinion that unlike other ethnic tribes, the Igbos are communal and would have rallied round to fulfill the terms and conditions of publisher and activist, Omoyele Sowore’s bail.
Recall that Sowore who is standing trial for treasonable charges filed against him by the Federal government, was in court yesterday October 21st where the judge revealed that no one has come forward to stand as his surety for his bail conditions to be fulfilled.
Reacting to this development, Reno Omokri via a post shared on his Instagram page, said the bail conditions for IPOB leader, Nnamdi Kanu, were more stringent than Sowore’s, but they were all met because the Igbos rallied round for one of their own. Read his post below
“Despite the stringent bail conditions set for Nnamdi Kanu, Igbos wasted no time fulfilling it. Sowore’s bail terms are nowhere near as tough as Nnamdi Kanu’s, yet no one has stood for him. Yet, while he was in detention and court, many people were talking tough in his defence. It just tells you a lot about Igbo communal spirit as compared to other ethnic nationalities. If Sowore was Igbo, he would have been out of jail by now.
An Igbo Senator, Enyinnaya Abaribe, risked jail, put his Senatorial office on the line, to stand as surety for Kanu. Are you trying to tell me that none of Sowore’s kinsmen have ordinary ?50 million? I am yet to see a people who love themselves like the Igbo.
In America, believe it or not, Igbo unions give new comers loans to set up their own businesses. I have seen news stories of destitute Nigerians abroad who need assistance. That can never happen to an Igbo. Other Igbos in that community will rally round and rehabilitate him or her. Let us all learn that self love from Ndi’Igbo and Nigeria will be better for it” he wrote
Gossip News Politics