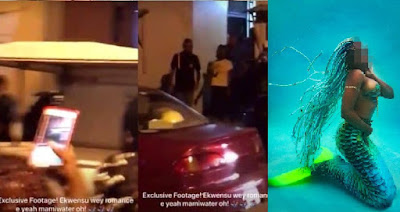 Pandemonium broke out in Fagunwa hall, a female hostel in the University of Lagos, last night October 22nd, after students residing in the hall claimed a fellow student confessed that she is a mermaid.
Upon hearing the news that one of them confessed she was of the marine world, female students ran out of the hostel for ”safety.”
According to reports shared by some students of UNILAG, the alleged mermaid known as Olamide was said to have had misunderstanding with another student identified as Blessing who she was accomodating in her room. Olamide claimed Blessing stole her necklace and threatened to deal with Blessing with powers from the ”Marine Spirits.”
Giving a summary of the incident, an anonymous writer wrote:
“A girl named Blessing who is being squatted by Olamide in Fagunwa hall had a misunderstanding with her. The misunderstanding was caused by a missing wristwatch. Upon losing her necklace, Olamide suspected Blessing and immediately sent her packing from the room and also wrote long notes stating and threatening her not to ever mess with the Marine spirits frankly stating that she is one of them.
“This statement and notes written by the “mammy water” sparked speculations that she was an actual water goddess. Her roommates said that:
1. She only baths in the morning.
2. Upon waking, her bed is always soaked.
3. She wakes up to soak and pour water on her leg.
4. Praying to a necklace over her bed every morning.
“These statements provoked her roommates who dragged her outside while still emphatically insisting that she’s a mermaid.
“These frustrations caused her (mammy water) to reveal that the missing necklace (the one that causes fight) makes her turn into a fish. After these confessions, the Able-bodied Alpha base were then invited into the hostel to lead her out.”
On the other hand, an anonymous UNILAG student who is believed to have come in contact with the reported Mermaid said:
“I saw her tail. It’s actually real, her tail was gold and big but she turned back before alpha base came to carry her.
“The girl doesn’t allow people to pour water on her or take pictures of her, she acts weird.”
See video below;

- Different scenarios of how a female student allegedly turns into mermaid inside Unilag 's hostel.
- #Thread

29 people are talking about this
Gossip News