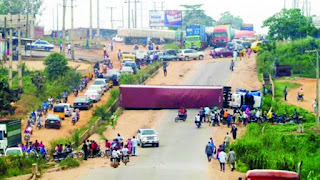 A trailer loaded with granite has on Tuesday crushed a twenty-year-old boy identified as Godspower Chukwuka Igbomor to death.
Naija News understands that the incident occurred in the afternoon of Tuesday, along the ever-busy Ogume/Kwale road by Nduku Primary School, Ogbole Ogume Community in Ndokwa-West Local Government Area of Delta State.
The deceased was reported to have died when the trailer lost control and ran into the bike the deceased was onboard.
The motorcycle rider conveying the deceased also sustained minor injuries in the incident.
After the incident occurred, the trailer driver was reported to have absconded over the fear of being lynched by angry mob who witnessed the scene.
The trailer was returning from Auchi and was heading to Kwale at a high speed when the driver suddenly lost control in the process.
The victim, now deceased was reported to have been crushed beyond recognition.
The leader of the vigilante group in the area, Mr. Louis Okekonum quickly contacted the police at Abbi.
When the Policemen led by a Divisional Crime Officer, DCO eventually arrived, the remains of the deceased were evacuated from the scene of the incident.
When contacted for comments, the Delta State Commissioner of Police, CP Adeyinka Adeleke confirmed the report in a telephone chat with our correspondent.
CP Adeleke said, “The 20-year-old boy who died was a passenger boarded an Okada.
“The Okada rider ran into the trailer from behind and the boy died. The Okada operator is currently receiving treatment at a hospital.”
Gossip News