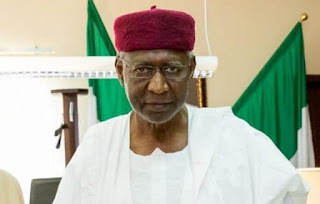 Chief of Staff to President Muhammadu Buhari, Mallam Abba Kyari is dead. He was a powerful figure in President Buhari’s government.

A native of Borno State in the northeast. Kyari was a journalist and former banker, who held senior positions in some of the country’s banks.

Mr Kyari gave up the ghost weeks after battling the deadly coronavirus. The news of his death was announced by the presidency in the early hours of today.

Recall that the deceased tested positive to the ravaging COVID-19, and had since then been receiving treatment.

Naija News had earlier reported that Mr Kyari visited Germany and Egypt in March this year and returned exactly a week later on Saturday, March 14th.

He had subsequently transferred from Abuja to Lagos State treatment. Details of his death are still sketchy, however, Femi Adesina, presidential spokesman, confirmed it in a tweet.

"Chief of Staff to the President, Mallam Abba Kyari, passes on. May God rest his soul. Amen. Funeral arrangements to be announced soon” he tweeted.